James Lester tells Alex King about why he took part in our pilot scheme PowerShaper Flex and his experience so far. Plus we have tips for what kind of batteries to buy and where to install them.

Why were you interested in taking part in PowerShaper Flex?

“For a long time we’ve been aware when we take actions together it has a big impact.

“For instance, we always hear about how they have to turn on power stations at half time in England football matches because so many people put the kettle on.

“I think this shows we’re learning more about how we can reduce our impact, by changing our usage patterns together.

“I’ve worked with Carbon Co-op in the past on making devices in our home support the grid. Currently we do this by timing when we charge our battery and our electric car.

“In future, thanks to PowerShaper Flex, we’ll be able to use the home battery and the battery in our electric vehicle to feed energy back into the grid and help support our neighbours.

How will it work at a high level?

“The aim would be your car will be plugged in when you get home and it will feed its remaining charge back into the grid to support demand at peak time. It then gets charged up after midnight when demand is much lower so that in the morning it’s fully charged.

“That should be managed without any input from the householder. But we’ll see a discount on our bill from the flexibility we have provided. That for me is the future that we are trying to get to.”

Do you need to be super energy conscious to take part in PowerShaper Flex?

“Not at all. PowerShaper is about moving your usage to a time where it’s greener, rather than stopping you doing things you want to do.

“While projects like this are great for energy enthusiasts like myself who want to get into the how and why, for most people it’s just got to work.

“You can’t add to anybody’s daily mental load. It saves you money. It makes you greener. It just works. That’s all you need to know.” 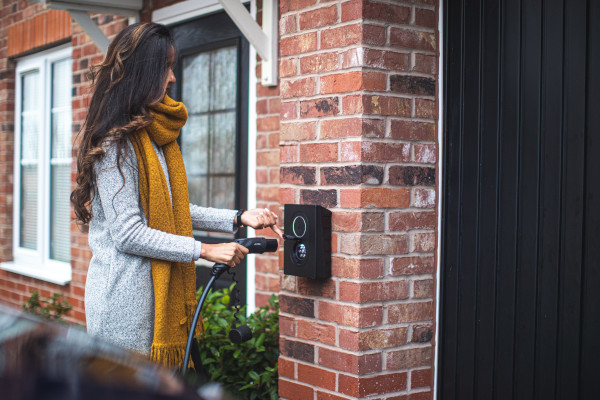 When did you get your solar panels and battery?

“We got our solar panels back in 2018 and added a battery in 2021. Our three bed semi uses 3-4 megawatt hours (MWh) in a year and our solar generates about 4 MWh each year.

What kind of battery do you have?

“Our battery is a Sonnen Eco 9.43. We got that as part of a trial to help us to see how it would help us shift our energy usage. It was initially 5 kilowatt hours (kWh), which is enough to run an oven for around two and a half hours. We put additional batteries in so it’s now 15 kWh, which is pretty much our daily usage in the winter.”

So your battery can store enough power to get you through each day in winter?

“Yes. And for us winter is the important time, which is slightly counterintuitive because you might think that in the summer you want to store everything you generate during the day.

“But you’re not using as much energy in the summer as you are in winter, so when it came to planning our system I looked at our peak daily usage (rather than peak solar generation) and this is highest in winter.

“Solar works brilliantly from March to October. It’s helped us cut our electricity bill in half. We don’t use electricity for heating (yet), but our car is electric, our cooking is electric and we have the typical gadgets of a modern home. 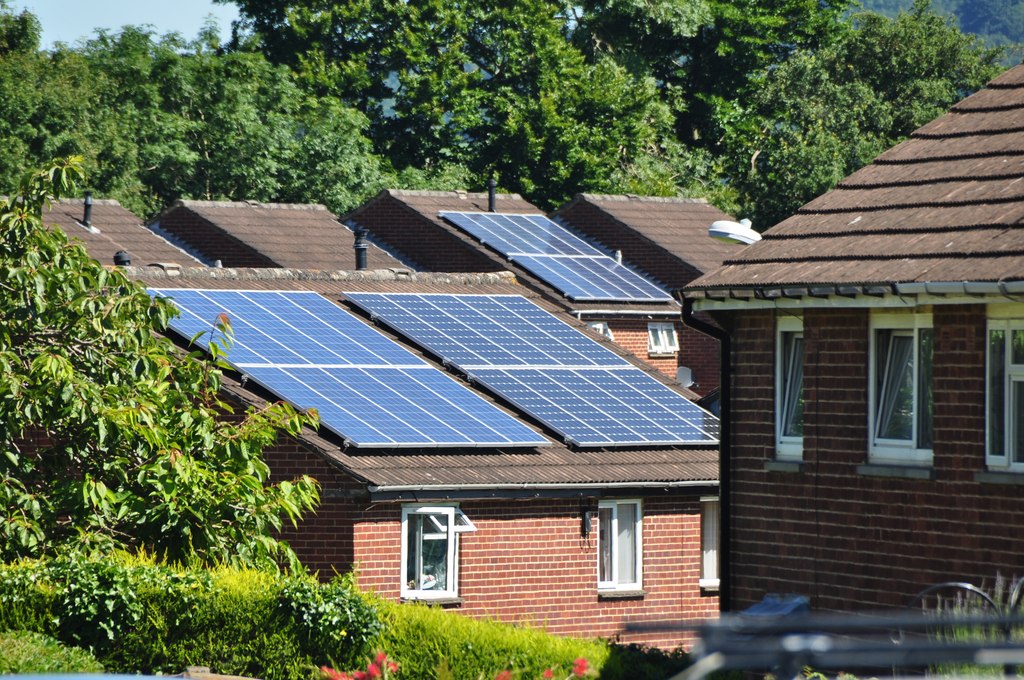 “The problem with solar, however, is that you don’t always generate it when you need it.

“Most families might be out during the day at work or school, and come home and need to use energy for things like cooking in the evenings.

“But the evening is never a peak time for solar generation. A battery helps you shift that solar, storing it up during the day and putting it to work in the evening.

“The other thing that a battery can be really good for is moving your energy usage off peak.

“There’s quite a few tariffs that provide a cheaper rate for usage between midnight and 4AM, like Octopus Go. So battery plus solar is great for eight months of the year and the other four months, when solar generation is low, the battery can be used to store cheaper, greener off-peak electricity.”

How has the energy crisis impacted this?

“It’s certainly changed the economics of a battery. Previously batteries were only really worth looking at if you had solar. Then electricity prices jumped from 14p per kWh to 34p, so now a battery is worth considering if you can get an off-peak tariff at much lower cost, and in the future get paid to help balance the grid when those systems are more widely in place. 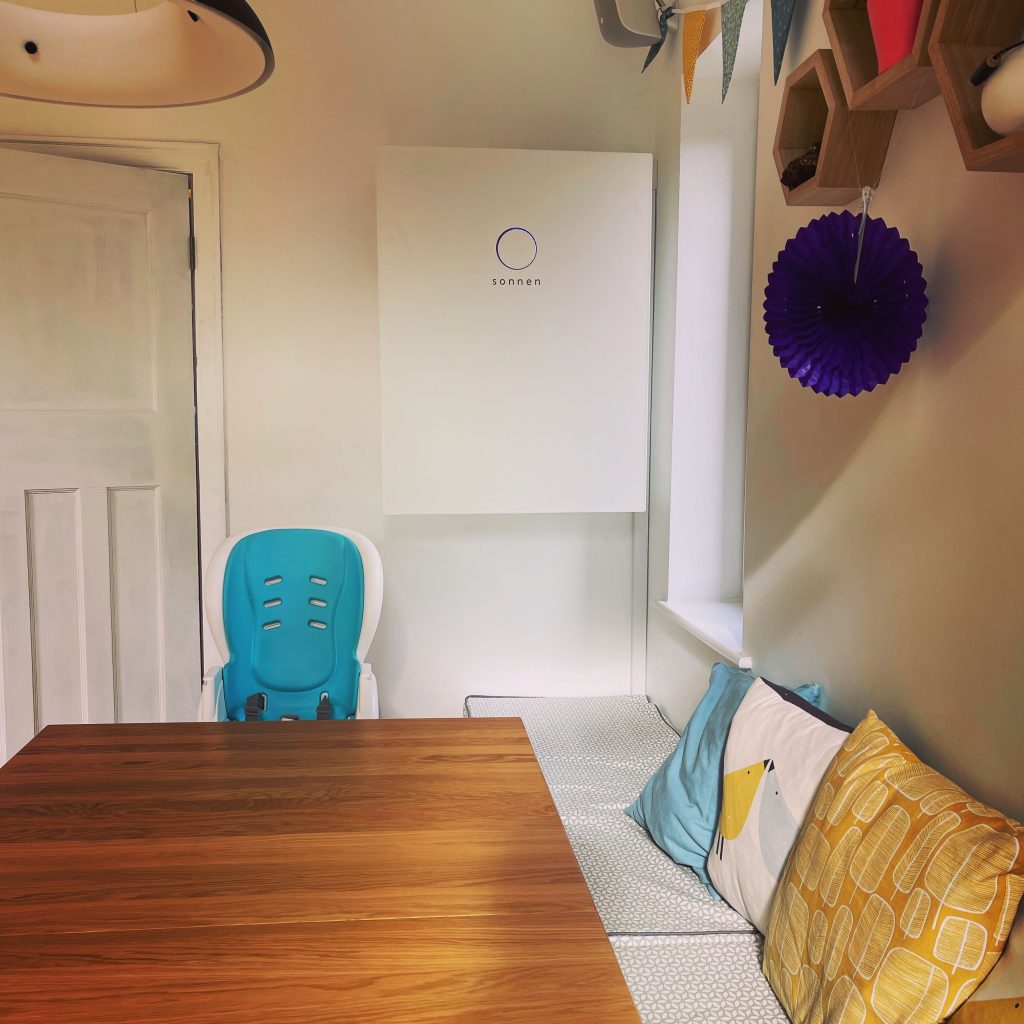 James’ Sonnen Eco 9.43 now has a capacity of 15 kWh – roughly their daily usage in the winter.

What range of products are available to people interested in this?

“There are two main types of batteries that you can look at: AC coupled or DC coupled.

“An AC coupled battery is the simplest to install, it can even go in a house without solar, it’ll sit there listening to your electricity feed. If you’re generating electricity, it’ll store it. If you need electricity, it will discharge to reduce your grid usage.

“The slight drawback with solar plus an AC coupled battery is there are a bit more conversion losses as the solar goes from DC to AC and back again.

“If you’ve got a solar panel system that can work with a DC coupled battery, that’s definitely worth considering. A DC battery stores energy directly from the solar panels, it’s the most efficient way of storing energy.

“The downside of a DC coupled battery is the energy still needs to be converted back to AC for use in the home, generally the solar inverter will convert this stored energy for you.

“For example, a 3.5 kilowatt (kW) inverter plus DC battery would be able to output 3.5kW at most, whereas the same inverter plus a 3.5kW AC battery could output 7kW together. This means you could run the oven, hob and kettle together and still be off-grid. For us, this was worth the slightly lower efficiency of an AC battery.”

Are there any particular products or companies that produce those two types of batteries that you’d recommend people look at?

“There are many other AC coupled batteries, GivEnergy, PowerVault etc. There’s a vibrant community on facebook focussed on DIY Solar and Battery systems, there’s something for every budget.

“We have a Sonnen battery which is working well. I think it’s worth looking at what chemistry the battery is using, Sonnen uses Lithium Iron Phosphate (LiFePo). This makes them heavy batteries, so you wouldn’t put them in a car, for example. The upside is they’re safe and they’ve got a long lifetime.

“Finally, make sure to think about where the battery will be located. I personally wouldn’t put a battery in a loft – it will be too hot in the summer and too cold in the winter. Ours is in a utility room. If you’ve got a garage space that’s also ideal, some batteries can even be outside.” Grid Flexibility: what is it and why do we need it?

Our energy system is transforming rapidly. As we move away from fossil fuels, our lives are becoming more and more … In the smart home... smart tariffs